Dominique De Fazio: he is recognized as one of the most famous acting teachers in the world. Teacher and lifetime member of the New York Actors Studio. De Fazio is the creator of the De Fazio System for Creative Study and Research – one of the few systems of creative study in the performing arts ever created. He has taught this system to thousands of actors, directors, writers, producers, teachers, educators, psychologists, musicians, singers, and dancers from Europe, North America, South America, Asia, and Australia. His students include award-winning actors, directors, writers, and authors. Six of his original theatrical plays have been produced in the United States, Italy, and Germany. His full-length film script, Dancing on a Dry Salt Lake, has won him awards from the Los Angeles Art House Film Festival, the Los Angeles REEL Film Festival, and the Los Angeles Movie Awards. 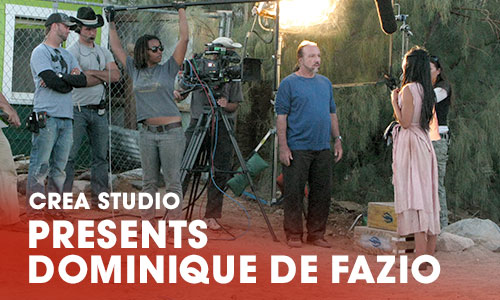 “EXPERIENCE and EXPRESSION” –toward  THE POETIC THEATREA "

PLEASE NOTE:
Places are limited, to participate you must register with the Crea Studio Association.

To access the meeting one needs to become a member of Crea Studio Cultural Association – the fee for ordinary members is 25,00 euro.
The persons who enrolled already in a seminar or workshop in September/October 2020, are alredy members of Crea Studio and do not need to pay an other membership fee.

Two events:
These events includes a lively and interactive participation. Participants will be called upon to perform improvisations, scenes and exercises led by Dominique De Fazio

A Seminar on Gesture and Movement And "The Unity of the Self" in Acting". Consider, for a moment, your whole self as a body, a flow, without separate compartments - a single psycho-physical-sensory gesture of your whole body and your spirit". - via meeting on Zoom platform

In this program, one does practical training in Level I of Dominique De Fazio’s Training System: HOW TO CREATE.   In this winter workshop, under the personal guidance of Dominique De Fazio, one will begin to train in the eight aspects of the Level I Training. -  via meeting on Zoom platform.

For any doubts do not hesitate to contact us by email info@dominiquedefazio.it